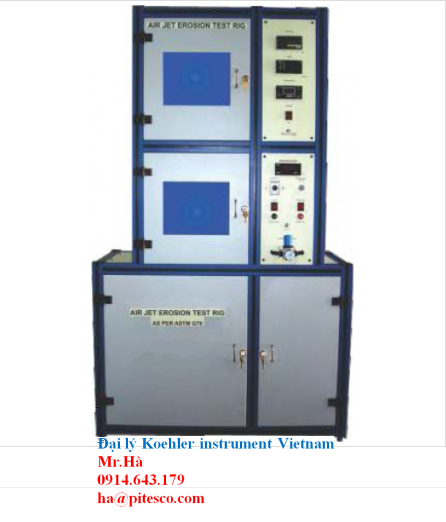 The Air Jet Erosion Test Rig has been developed to evaluate the erosion resistance of variety of materials and conforms to the specifications of ASTM G76 standard. The principle of operation consists of subjecting the test sample to a jet of air carrying the erodent, through a tungsten carbide nozzle of a known diameter. The impingement of the erodent particles on the test sample surface causes erosion and this is quantified by weight loss method. The particle velocity is controlled by varying the flow rate of air and the erodent feed rate is varied by changing the speed of the conveyor system which delivers the erodent to the jet of air. The particle velocity is measured with a well established method – Double Disc arrangement. The test sample temperature can be varied from ambient to 4000C and test sample inclination is infinitely variable 0-900 with respect to the jet of erodent particles.